Unless you have been on a self-imposed “news hibernation” over the last several months, you know that the Federal Reserve has begun to raise interest rates. The mortgage market, because of the Fed’s action, has also increased mortgage rates. 30-year mortgages were in the low-to-mid 3% range at the start of the year and are now in the low-to-mid 5% range today.

The stated reason for the rate increase is to battle inflation by raising borrowing cost and therefore lowering demand. In 2019, we experienced a period of rising interest rates that resulted in a lower sales pace for lake real estate. (See chart below.) 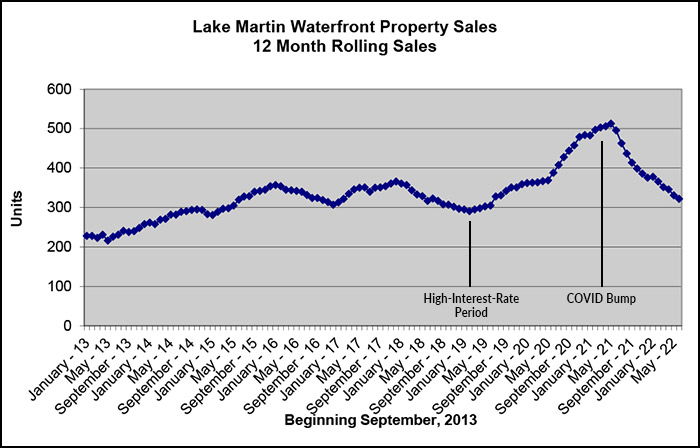 It is natural, if you look at the 2019 data, to expect a slowdown in sales. We are eager to see if the inflation medicine is going to have the same effect this year. Our first look at year-over-year sales data for the year ending in June 2022 may be a bit too early to see how rates might be affecting the market. In fact, in our local market, higher rates may not have that great of an effect on sales. Why? Inventory, or the lack thereof, has been a drag on the market for well over a year.

What the numbers say

Since the fall of 2020, for-sale waterfront inventory has been historically low. The chart below shows the inventory level dating back to 2013 in pink. Inventory is typically at its lowest in the winter months and builds to a peak in the summer “sales” period.

This graph began to smooth out in 2017 through 2019 where the inventory and sales rates stayed fairly consistent. That all changed when COVID social distancing made Lake Martin a haven. Starting in March of 2020 and through May of 2021, lake property was snapped up, leaving an almost non-existent supply of property for potential buyers.

That resulted in lower unit sales since the COVID peak but much higher property values! The average price for a waterfront house in June of 2019 was $670,670. The current average price for sales over the last 12-months is $1,108,370 or a 65% percent increase over the last three years. Lower supply and increased demand will result in higher prices.

What we expect to happen

Rates are supposed to lower demand by increasing ownership cost. There are two metrics that we watch to gauge demand and the effect of higher rates. The first is the conversion rate. This metric tells us the percentage of properties that are placed in the local MLS that sell within a 12-month period. In 2013, a recession year, the conversion rate was a scant 32.5%.

A normal lake market would be roughly 50%. Over the last year, 352 residential properties came on the market, and 322 sold—a 91% conversion rate. Last year, this rate was right at 100%. We think this rate, while still very strong, is lower due to some property owners being overly aggressive with list prices.

A second metric we use to gauge the market is the list-price-to-sales-price ratio. In June of 2019, this metric stood at 94.9%. This means a property listed for $1,000,000 will likely sell for $949,900. In our opinion, the 2019 market was normal. Currently, this metric stands at 97.5% percent for all waterfront residential properties sold over the last year. We think this is an indicator of a seller’s market.

We predict that the conversion rate will drop slightly due to higher borrowing cost, but because of consistently low inventory, not by very much. Our Realtors® report that properly priced lake homes are still selling very quickly, usually going under contract within two weeks and closing within 60 days.

We don’t think the Federal Reserve will be able to solve the supply problem at Lake Martin. We do think that the higher rates might cause some to lower the budget or delay a purchase. The popularity of the lake seems to be on a steady rise, and with new amenity and shopping additions underway, that popularity is only going to grow.