Is the FED making a difference?

Higher mortgage rates increase the cost of ownership, and the FED hopes that real estate prices will come down due to either higher cost of ownership or reduced demand. We have been watching the impact of the higher rates on lake property sales, and we think it is too early to tell what effect higher rates are having on sales volume or property values.

Residential sales volume is slightly lower according to the data we have pulled from the local MLS. Shown below are the year-over-year sales figures for the last three months. That three-month period has also seen the last two large FED interest rate increases (two increases at 0.75% each).

As you can see, sales have decreased but only slightly. In fact, the rate of decrease (compared with the previous year) has actually gone down since July. The chart below shows the sales volume on a rolling average over the last 10 years. You will note what we call the COVID bump was followed by levels substantially higher than before the pandemic. 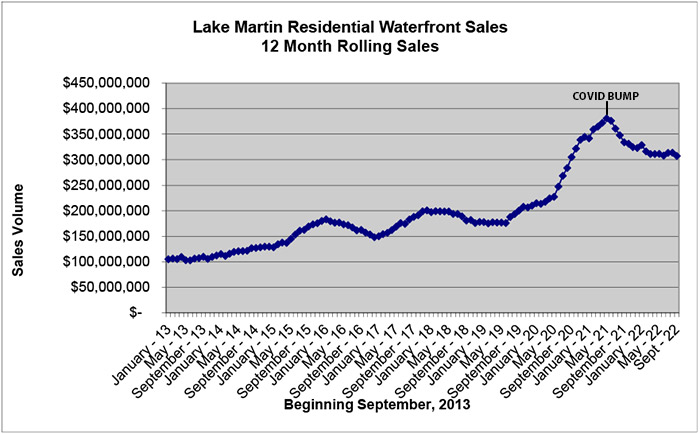 This chart also shows, as we reported last year, that there would be a drag on sales because of the very low inventory levels. This can be seen graphically in the inventory chart below. Below in the July-through-September data, the available inventory has not changed dramatically during those months. 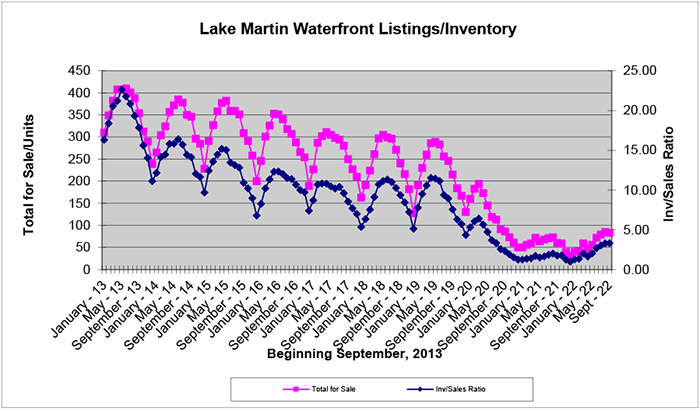 The data shown above is just a snapshot of lake sales activity at a given point in time, and we will continue to monitor and report the effects rates may have on the market. Our first take is that increased values (inflation) on lake property has been driven mostly by increased demand for lakefront property coupled with a much smaller supply of “for sale” property.

Sales volume of waterfront lots has actually increased 10.4% year-over-year. That sales volume is mostly for custom home construction. Builders in our neighborhoods are busy building custom homes, and very few “for sale” projects are underway. Needed inventory promises to be constrained moving forward, so we do not expect to see radical price reductions due to lower inventory.

What we have noticed on the construction side of the business is that lumber prices have dropped considerably from peak levels to nearly pre-pandemic prices. Builders and designers are working through their backlog of work so they can start new projects sooner. While building costs have not dropped, other than lumber, it does appear that supply chains are easing.

If you want to stay informed on what is happening in real time, please reach out to one of our Realtors® today.